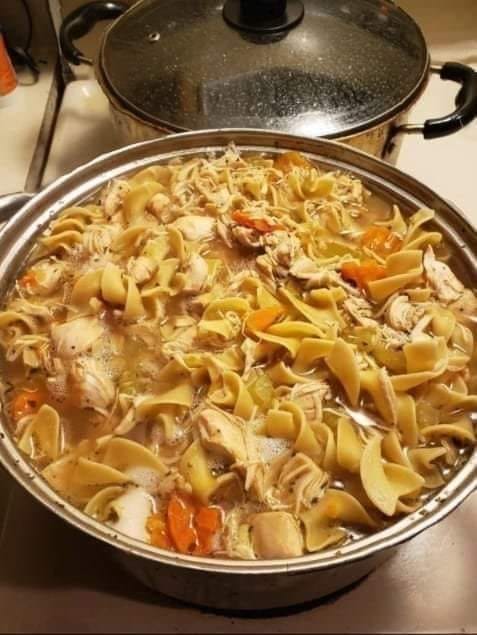 INSTRUCTIONS
Place the chicken and whole onion in the bottom of a large saucepan. Pour enough water over the chicken to cover it completely. Put the peppercorns in a metal tea infuser; add to pot.

Bring water to a boil, reduce heat to medium-low and simmer until chicken is no longer pink and falls off the bone, 40 to 60 minutes. An instant-read thermometer inserted into the thickest part of the thigh, near the bone, should read 165 degrees F (74 degrees C).

Remove chicken from broth with slotted spoon in bowl; set aside to cool.

Remove the onion and squeeze it for as much flavor as possible. Discard the onion.

Stir carrots, parsnips and celery into broth; bring to a boil and cook vegetables until tender, 10 to 15 minutes. Remove and discard the peppercorns.

While the vegetables are boiling, bring a large pot of lightly salted water to a boil. Cook egg noodles in boiling water, stirring occasionally, until cooked but firm to bite, about 5 minutes. Drain. Divide among 6 soup bowls.

Remove the meat from the chicken and discard the bones. Cut the meat into bite-sized pieces and stir into the vegetable mixture with the parsley. Season with salt. Pour the soup over the noodles to serve