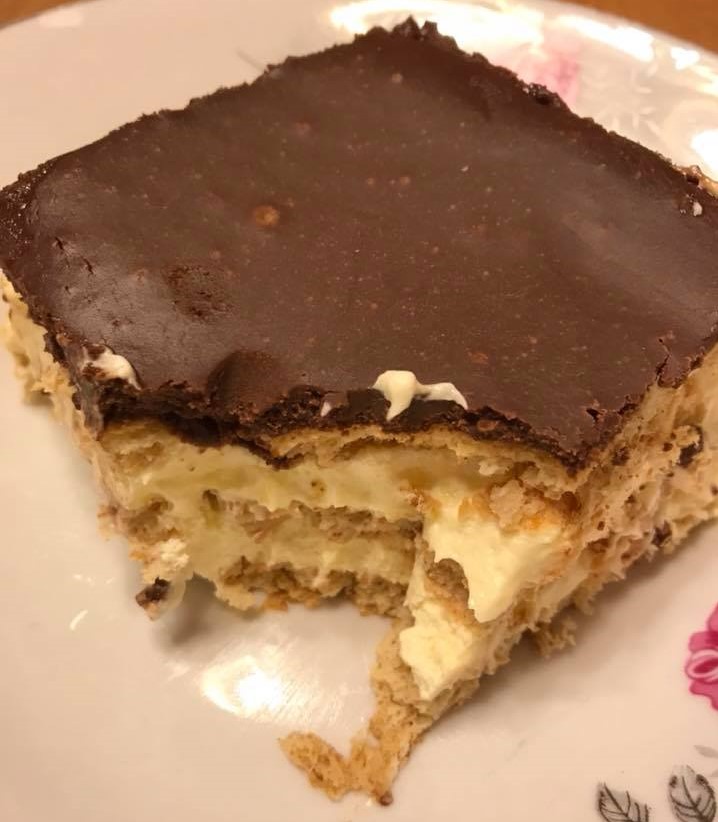 – This simple icebox cake is completely wonderful and just so enjoyable. No baking, no fuss. Rich topping with chocolate, a fun vanilla custard core, and graham crackers. In cake form, it tastes like an eclair! And it’s much better than baking an eclair.

– You guys, I’m always searching for super-duper dessert recipes that are simple to make. An eclair is one of my all-time favorite treats.

INGREDIENTS TO MAKE THE ECLAIR CAKE:
– 18 Graham Crackers broken in half.

– COOL-WHIP Topping, I used a container of -8oz- thawed.

DIRECTIONS TO PREPARE THE ECLAIR CAKE:
– I whisked the pudding mixture with the milk in a large tub, using a hand mixer.

– I allowed it to set up a bit, then I stirred in the thawed Cold Whip.

– I put a single layer of graham crackers, about 10 squares, in an 8.8-inch square pan, then I covered with 1/2 of the cool pudding whip mixture.

– I repeated the same step by adding 10 more squares of graham crackers.

– Then, over the squares, I scattered the other half of the pudding mixture.

– Then I made the chocolate topping over the top, I covered with the topping, and cooled for 3 hours in the refrigerator.

– I melted the white chocolate chips in 20-seconds intervals in the microwave just before serving. Depending on the microwave, it could take about a minute to melt.

– I used a spoon to drizzle white chocolate over the top to resemble the top of an eclair, and I removed it from the refrigerator.

– Sliced it, served it, and enjoyed it!

FOR THE CHOCOLATE TOPPING:

– In a shallow bowl, I stirred the brown sugar and cocoa powder together.

– I added the butter and milk and brought it to a slow boil in a medium-sized saucepan over medium heat.

– I boiled it for 3 to 5 minutes. Occasionally stirring.

– I removed it from the heat and blended it with the cocoa and brown sugar.

– I returned it to fire, and whisked for 3 minutes, until smooth.

– I removed it from the heat, and I added the vanilla.

– I put it aside for 5 minutes to cool, then I poured over the Eclair cake and transferred it to the refrigerator to set it up.