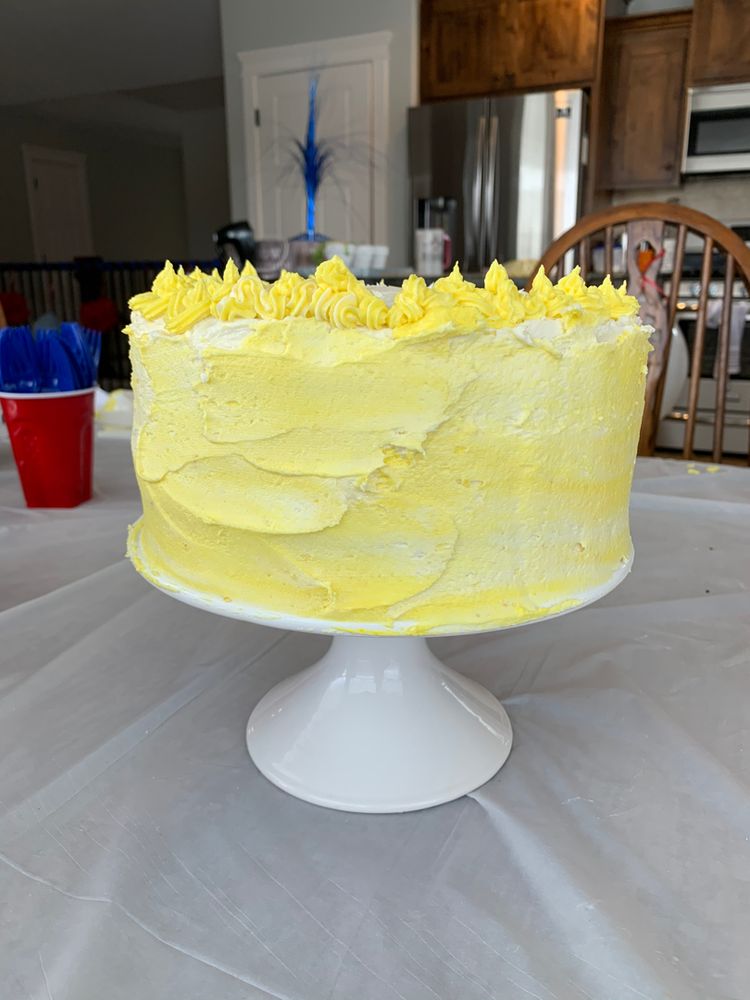 This is The Ultimate Lemon Layer Cake, with delicious and fluffy cake, velvety buttercream icing, silky bavarian cream, and a zesty curd filling! No other dessert has as much fresh lemon taste as this one.

For the Lemon Cake, you’ll need the following ingredients.

Prepare the Cake
Preheat the oven to 350 degrees Fahrenheit (176 degrees Celsius). Grease three 8-inch cake pans and line the bottoms with parchment paper.
In a medium mixing basin, combine the flour, baking soda, baking powder, and salt. Remove from the equation.
In a large mixer bowl, cream the butter and sugar on medium speed for about 2-3 minutes, or until light and fluffy.
Combine the egg whites and vanilla essence in a mixing bowl. Scrape down the bowl’s sides as required to ensure everything is well blended.
Mix roughly a third of the flour mixture into the batter on medium speed until well mixed.
Beat in roughly half of the milk, as well as the lemon juice and zest, on medium speed until well combined.
After each addition, alternate adding dry and wet ingredients, scraping down the sides of the bowl as needed and mixing until fully mixed. There should be three total dry ingredient additions and two total milk additions. Finally, add the dry ingredients.
Using a spatula, evenly distribute the batter across the cake pans.
Bake the cakes for 25 to 30 minutes, or until a toothpick inserted in the center comes out clean. It’s natural for the tops to be a bit browned, so don’t be frightened.
Remove the cakes from the oven and set them aside to cool for 1-2 minutes before transferring them to a cooling rack to finish cooling.

Prepare the Curd
In a double boiler, combine all of the ingredients (or in a metal bowl over a pot of simmering water). Cook, whisking continually, until the mixture thickens and reaches 170-180 degrees Fahrenheit, or coats the back of a spoon.
Pour the lemon curd into a heat-proof dish, cover with transparent wrap pushed against the curd’s surface to prevent a film from forming, and chill until cool and solid.

To make the Bavarian Cream

combine all of the ingredients in a mixing bowl.
Sprinkle the gelatin over the lemon juice in a small dish and put aside.
Whisk the egg yolks together in a medium basin and put aside.
In a large saucepan, simmer 3/4 cup heavy whipping cream, sugar, vanilla essence, and lemon zest over medium heat until heated.
To temper the eggs, remove the cream mixture from the heat and slowly pour the hot cream into the eggs.
Return the egg and cream mixture to the saucepan and heat it again. Cook, stirring occasionally, until the mixture is thick enough to coat the back of a spoon or reaches 160°F. It should take only a few minutes.
Stir the gelatin into the hot cream until it is completely smooth.
Pour the custard into a separate bowl and place it over ice in a third bowl. Allow to cool to room temperature before serving.
While the custard cools, whisk the remaining cup of heavy whipping cream and powdered sugar until firm peaks form in a large mixing dish.
When the custard is finished, carefully fold in the whipped cream. To prevent the whipped cream from wilting or melting, make sure it’s at least room temperature.

Assemble
The cake layers should be fairly level, but if there is a dome, the tops of the cakes should be trimmed to make them flat. Each cake should be cut in half, resulting in 6 layers of cake. Remove the lemon curd and bavarian cream from the refrigerator and whisk them together until smooth. Any lumps in the bavarian cream may need to be worked out by hand whisking.
On a serving tray, place the first layer of cake. Around the outside border, pipe a little dam of icing.
1/3 of the bavarian cream should be poured into the dam.
On top of the cream, place the second layer of cake. Because the cake layers are delicate, I recommend lifting them with a cake lifter.
Make a second frosting dam around the outside border of the cake. Half of the lemon curd should be poured into the dam.
Repeat with a third of the bavarian cream, another layer of cake, and a dam of frosting.
Rep with a second cake layer, a dollop of frosting, and half of the lemon curd.
Repeat with the remaining 1/3 of the bavarian cream, another layer of cake, and the dam of frosting.
Place the last layer of cake on top, then frost the exterior with a crumb coat and chill for at least 2-3 hours to firm up the cake.
Frost and adorn the exterior of the cake as desired. To get the watercolor effect, frost the exterior of the cake coarsely, then use yellow gel icing color to tint the remaining frosting. Place a few blobs of yellow frosting around the outside of the cake, then smooth it out a few more times to evenly distribute the yellow frosting and get the desired appearance. Pipe over the borders with the remaining yellow icing.
Keep the cake refrigerated until ready to serve. It’s better to keep the cake in an airtight container and consume it within 3-4 days.