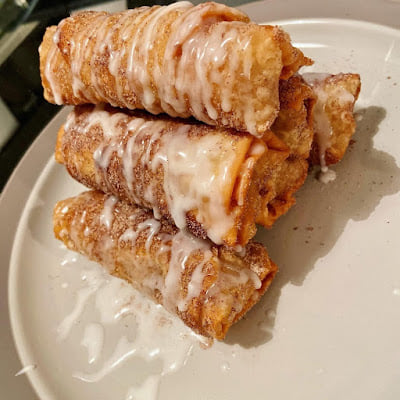 ½ C. Brown sugar
1 Tbsp + 1 tsp. Cinnamon divided
Instructions
Preheat the oven to 400 degrees.
Dice the peaches and add them to a skillet over medium high heat on the stove.
Mix the cornstarch with the water and add to the skillet along with the sugar. Stir until the sugar is melted, and the mixture thickens.
Stir in the vanilla, 1 tsp cinnamon and a squeeze of fresh lemon juice.
Remove the mixture from the heat and let cool.
Place an egg roll wrapper on a flat surface and add a layer of the filling to one end.
Fold the sides in and roll the egg roll closed.
Use a bit of egg to secure the egg roll closed.
Dip the egg roll in the melted butter.

Stir together the brown sugar and 1 Tbsp of cinnamon in a bowl, and toss the butter dipped egg rolls in the cinnamon sugar mixture.
Place the egg rolls on a parchment lined baking sheet and bake for 15-20 minutes until browned and crispy.
Enjoy!