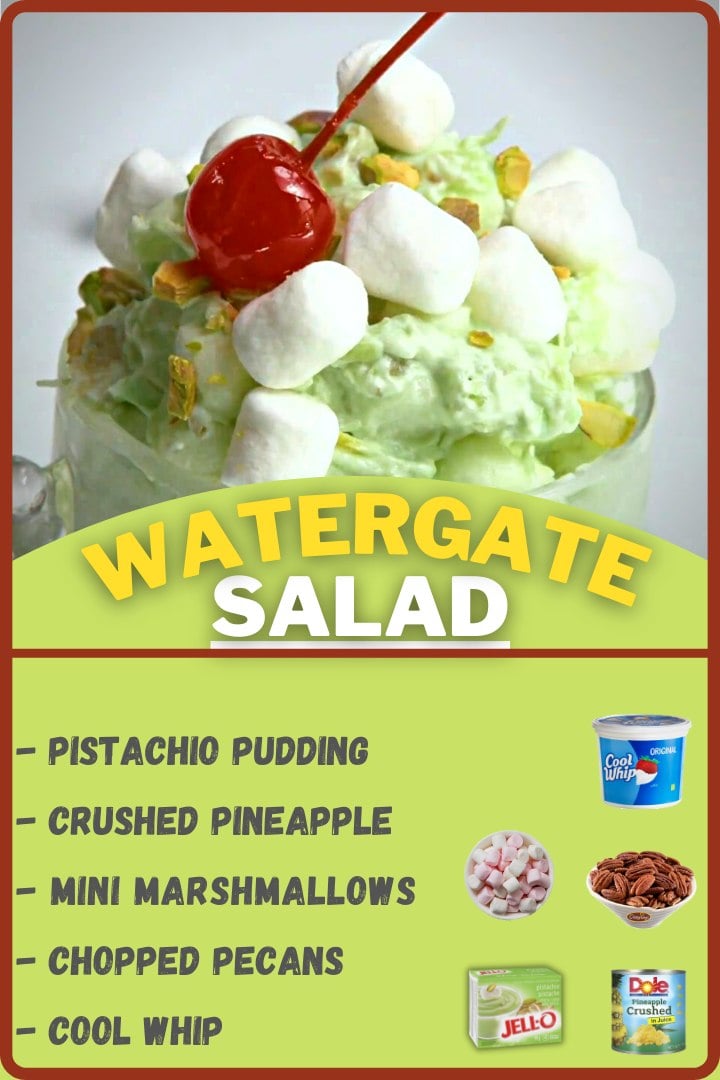 HOW TO MAKE WATERGATE SALAD?

When I was a kid, one of my favorite foods to eat was this amazing “Watergate salad”. Every year for Easter and summer cookouts, my mother would prepare this dish. It’s possible that if you didn’t grow up in the South, you’re wondering what the hell a watergate salad is, so allow me to quickly explain what it is.
I’m not sure whether it’s a southern thing or simply an old-school thing, but we used to eat a lot of dessert salads when I was growing up! My mother used to prepare watergate salad, and my grandmother used to create a dish called strawberry pretzel salad, which consisted of a pretzel and butter crust, a layer of whipped cream and cream cheese, and a layer of strawberry jello topped with whipped cream.

To make watergate salad “healthier,” my mother would add fat-free Cool Whip and sugar-free pistachio pudding mix instead of mayonnaise. I recently glanced at the ingredient labels for these things and instantly realized that I wanted to figure out a method to create watergate salad using natural food components instead of processed foods. They were very frightening!

Aside from aspartame and food coloring, the sugar-free pistachio pudding mix has corn syrup as the first component and hydrogenated vegetable oil as the third ingredient. Thank you very much! Here’s how I made this recipe a little more nutritious:

The recipe calls for canned crushed pineapple (that is packaged in juice rather than syrup), which I used since I had hoped to use fresh pineapple but something always tasted wrong when I tried it with it. There is nothing better than the taste, and it also adds a familiar texture to the meal.

In place of the pudding mix, I used vanilla Greek yogurt mixed with spinach for color and a dash of almond flavor to create a green-hued dessert. And, of course, I’m adding chopped pistachios to give the dish a pistachio taste.

FOR THIS WONDERFUL SALAD, YOU’LL NEED:

Half a Cup.Of chopped pistachios.

Half a Cup.Of granola, I used almond honey granola.

A Cup.Of vanilla Greek yogurt, you can also use coconut milk yogurt.

Half a Cup.Of baby spinach.

AND TO MAKE IT, YOU NEED TO FOLLOW THESE STEPS:

Blend the spinach, vanilla Greek yogurt, almond extract, and salt in a blender until the spinach is fully chopped and the mixture is green.

Toss the salad with the green Greek yogurt mixture once it has been poured on top.

If you’re using dates, cut them up and add them.

Place the mixture in the refrigerator for 2-3 hours to allow it to cool completely before serving.

I hope that you’ll try this recipe as soon as you can!! It will be one of your favorite salads for sure!! So don’t hesitate to make it and share it with your friends!!